HMT buys a number of woods from Africa. We have a clear and unequivocal requirement of FSC® certification, or another form of assurance that the forest and the local environment are treated in a responsible manner. Get an offer

Africa’s rainforest area is concentrated along the Guinea coast and in the Congo Basin, where there is a lush, tropical lowland rainforest containing many palms and tall trees in the Fabaceae and Euphorbiaceae families. As with its wildlife, Africa’s rainforests have far fewer plant species than the rainforests of Asia and South America. In dry areas, the rainforest grows along the river banks as narrow belts of gallery forest, and the highlands are dominated by mountain rainforest containing conifers such as Podocarpus. Above the mountain rainforest in the mountains of East Africa, there is a subalpine zone with shrub-like or woody heathers and Philippa. Higher up still is an alpine zone with “rose woods” of the genus ragwort and lobelia as well as northern species of sedge and fescue.

HMT buys a number of woods from Africa. We have a clear and unequivocal requirement of FSC® certification, or another form of assurance that the forest and the local environment are treated in a responsible manner.

Yellow-brown colour, which quickly turns olive brown. Uniform structure without significant grain (grows all year). Iroko is one of the woods with properties most similar to teak. FSC® certified available.

Reddish brown mahogany type with fine, uniform grain structure. Mahogany is perfect for worktops as it is very oily, durable and highly maintainable. Mahogany darkens with age, but if exposed to strong sunlight over a long period of time, the worktop can become lighter.

Wengé is a dark wood with an attractive grain structure. Makes for a highly exclusive worktop with a uniform appearance. Wengé is a very dimensionally stable wood. The worktop may be light brown/pale green and speckled on delivery, but “matures” later in the light and air to become a dark chocolate brown, brown-violet or almost black. It may have marked graining. The wood also contains oils that enhance its natural protection and resistance. FSC® certified available. 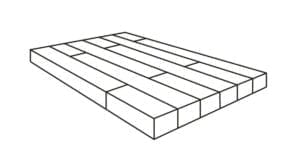 Vibrantly striped with an attractive grain. A Zebrano worktop has a harmony of its own and cannot be compared with any other type of wood. The heart wood is yellowish with thin, brownish stripes.

Herning Massivtræ A/S is a company where quality, reliability of supply and competitive pricing are paramount.

This website uses cookies to improve your experience while you navigate through the website. Out of these, the cookies that are categorized as necessary are stored on your browser as they are essential for the working of basic functionalities of the website. We also use third-party cookies that help us analyze and understand how you use this website. These cookies will be stored in your browser only with your consent. You also have the option to opt-out of these cookies. But opting out of some of these cookies may affect your browsing experience.
Necessary Always Enabled
Necessary cookies are absolutely essential for the website to function properly. This category only includes cookies that ensures basic functionalities and security features of the website. These cookies do not store any personal information.
Non-necessary
Any cookies that may not be particularly necessary for the website to function and is used specifically to collect user personal data via analytics, ads, other embedded contents are termed as non-necessary cookies. It is mandatory to procure user consent prior to running these cookies on your website.
SAVE & ACCEPT